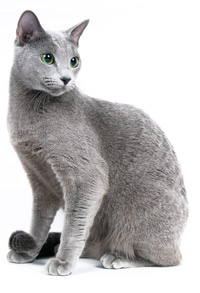 The Russian Blue is a cat breed that has a silver-blue coat. They are very intelligent and playful, but tend to be shy around strangers. They develop close bonds with their human companions and are sought out as pets due to their personalities and coat.

The Russian Blue is a naturally occurring breed that may have originated in the port of Arkhangelsk, Russia.[1] They are also sometimes called Archangel Blues.[2] It is believed that sailors took Russian Blues from the Archangel Isles to England and Northern Europe in the 1860s. The first recorded appearance outside of Russia was in 1875 at the Crystal Palace in England, as the Archangel Cat. The Russian Blue competed in a class including all other blue cats until 1912, when it was given its own class.

The breed was developed mainly in Russia and Scandinavia until after World War II. Prior to this, a lack of numbers of Russian Blues led to cross breeding with the Siamese. Although Russian Blues were in America before the war, it was not until the post-war period that American breeders created the modern Russian Blue that is seen in the US today. This was done by combining the bloodlines of both the Scandinavian and English Russian Blues. The Siamese traits have now been largely bred out. Unfortunately for breeders and showers, the short hair slate gray/blue color is often seen in mixed-breed cats.

During the early 1970s, a solid white Russian Blue (called the Russian White) was created by Australian breeder Mavis Jones through the crossing of a Russian Blue with a domestic white cat. By the late 1970s, the Russian White and Russian Black colors were accepted by cat fanciers in Australia as well as in South Africa and now also in England as Russian cats (in different classes). However, in North America, the Cat Fanciers Association does not recognize either variation of the Russian Blue.

The Russian Blue has bright green eyes, two layers of short thick fur, and a blue-gray coat.[5] The color is a bluish-gray that is the dilute expression of the black gene. However as dilute genes are recessive ("b") and each parent will have a set of two recessive genes ("bb") two Russian Blues will always produce a blue cat. The coat is known as a "double coat," with the undercoat being soft, downy, and equal in length to the guard hairs, which are an even blue with silver tips. The tail, however, has very dull, almost unnoticeable stripes. Only Russian Blues and the French Chartreux have this type of coat, which is described as thick and soft to the touch. The silver tips give the coat a shimmering appearance. Its eyes are almost always a dark and vivid green. Any white patches of fur or yellow eyes in adulthood are seen as faults in show cats.

Russian Blues should not be confused with British Blues (which are not a distinct breed but rather a British Shorthair with a blue coat; the British Shorthair breed itself comes in a wide variety of colors and patterns), nor the Chartreux or Korat which are two other naturally occurring breeds of blue cats, although they have similar traits.

The Russian Blue is an intelligent, curious, and tranquil animal. They are known for their friendliness, but are shy with strangers. They have been known to play fetch, and are sensitive to human emotions. They enjoy playing with a variety of toys and develop loyal bonds to their loved ones.[6] The Russian Blue gets along well with other pets and children in a household. They can be quiet, only meowing occasionally, but can also be very talkative. They are clean animals that are normally reserved around strangers, unless they are brought up in an active household. They love to play with other small pets, such as dogs, cats and ferrets. Many Russian Blues have been trained to do tricks.

Russian Blues have an average life expectancy of around 10–15 years, and have few health problems as they tend to have little to no genetic problems and are not prone to illness. They are a moderate-sized cat with an average weight of 3.5 to 7 kilograms (8-15 pounds) when full grown. Males will typically be larger than females. Their gestation period is approximately 65 days.