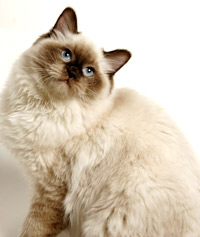 The Ragdoll is a cat breed with blue eyes and a distinct colorpoint coat. It is a large and muscular semi-longhair cat with a soft and silky coat. Developed by American breeder Ann Baker, it is best known for its docile and placid temperament and affectionate nature. The name "Ragdoll" is derived from the tendency of individuals from the original breeding stock to go limp and relaxed when picked up.

In the 1960s, a regular non-pedigreed white domestic longhaired cat named Josephine, who had produced several litters of typical cats, was injured in an accident involving a car and taken to the veterinary hospital at the University of California. Josephine was of a Persian/Angora type and had litters sired by several unknown male Birman or Burmese-like cats, one of which had the Siamese point coloration. Ann Baker, an established cat breeder, believed that Josephine was subject to a secret government genetic experiment during treatment at the lab, and claimed that it made Josephine docile, relaxed when picked up, and immune to pain. Genetic engineering of this nature was not possible in the 1960s; further, Baker claimed that Ragdolls were bred with skunks for their tail characteristics, and that Ragdolls were created by aliens. After Josephine recovered, her next litter produced kittens with similar temperament. When the subsequent litter produced more of the same, Baker purchased several kittens from the owner, who lived behind her, and believing she had something special, set out to create what is now known as the Ragdoll. The breed was selectively bred over many years for desirable traits, such as large size, gentle demeanor, and a tendency to go limp when picked up, as well as the striking pointed coloration.

Baker, in an unusual move, spurned traditional cat breeding associations. She trademarked the name "Ragdoll", set up her own registry ca. 1971, the International Ragdoll Cat Association (IRCA), and enforced stringent standards on anyone who wanted to breed or sell cats under that name. The Ragdolls were also not allowed to be registered in other breed associations. The IRCA is still in existence today but is quite small, particularly since Baker's death in 1997. IRCA cats are not recognized in any major cat breed organization or cat show.

Since the spread of the Ragdoll breed in America during the early 1960s, a breeding pair of Ragdolls was exported to the UK. This was followed by eight more cats to fully establish the breed in the UK, where it is recognised by the Governing Council of the Cat Fancy.

In 1994, a second group decided to leave the IRCA and form their own group due to increasingly strict breeding restrictions. This group later established the Ragamuffin breed. Because Baker owned the rights to the name "Ragdoll", no offshoot groups were legally able to call their cats Ragdolls, until 2005, when the trademark on "Ragdoll" was not renewed.

The docile and floppy nature of the Ragdoll is a characteristic thought to be passed down from the Persian and Birman breed. Opinions vary as to whether this trait might be the result of genetic mutation. The extreme docility of some individuals has led to the myth that Ragdolls are pain-resistant. Some breeders in Britain have tried to breed away from the limpness due to concerns that extreme docility "might not be in the best interests of the cat". On multiple occasions, ragdolls have been reported as nonchalantly approaching moving cars and vicious dogs and getting hurt. Breed standards describe the Ragdoll as affectionate, intelligent, relaxed in temperament, gentle, and easy to handle lap cat.

The Ragdoll is one of the largest domesticated cat breeds with a sturdy body, large frame, and proportionate legs. A fully-grown female weighs from 8 to 15 pounds (3.6 to 6.8 kg). Males are substantially larger, ranging from 12 to 20 pounds (5.4 to 9.1 kg) or more. The genes for point coloration are also responsible for the blue eyes of the Ragdoll. More intense shades of blue are favored in cat shows. Although the breed has a plush coat, it consists mainly of long guard hairs, while the lack of a dense undercoat results in, according to the Cat Fanciers' Association, "reduced shedding and matting". Mitted Ragdolls, which weren't allowed titling in CFA until the 2008-2009 show season, are often confused with Birmans. The easiest way to tell the difference is by size (the Ragdoll being obviously larger) and chin color (Mitted Ragdolls have white chins, while Birmans have colored chins), although breeders recognize the two by head shape and boning.

Ragdolls come in 6 different colors: red: seal; chocolate; flame; and the corresponding "dilutes", including blue, lilac, and cream. This also includes the tortoiseshell pattern in all colors and the three patterns. All Ragdoll kittens are born white. They have good color at 8 – 10 weeks and full color and coat at 3 – 4 years. The four different patterns are: