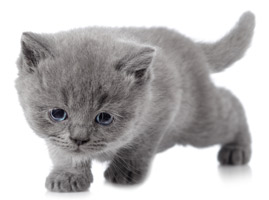 The British Shorthair is a domesticated cat whose features make it a popular breed in cat shows. It has been the most popular breed of cat registered by the UK's Governing Council of the Cat Fancy (GCCF) since 2001, when it overtook the Persian breed.

British Shorthairs have dense, plush coats that are often described as crisp or cracking, referring to the way the coat breaks over the contours of the cat's body. Their eyes are large, round and widely set and can be a variety of colours, though the copper or gold eyes of the British blue are the best known. Their heads are round with full, chubby cheeks and their bodies are large and muscular. The breed has a broad chest and shoulders, short legs, round paws and a plush tail with a blunt tip, the tail commonly has dark rings around it at the near bottom.

The males of this breed are larger than the females, and the size difference between them is more easily noticed compared to other breeds.

The males' average weight is 5-10 kilograms, whereas a female weighs up to 5 and 7 kilograms. The silver shaded variety is generally much smaller with females being 2.6-3.5 kilograms and males being 4.2-5 kilograms. As with many breeds, the adult males may also develop prominent cheek jowls that distinguish them from their female counterparts.

Their eyes stand out and tend to be large and round. Their relatively small ears with rounded tips are set far apart. They have pert snub noses and slightly rounded chins.

British Shorthairs come in many colours and patterns. For many years, the more popular blue variant was common enough to have a breed name of its own: the "British Blue". It remains one of the most popular colours, though there is now a large variety of other colour and pattern variants accepted by most feline governing bodies and associations. These include the colours black, blue, white, red, cream, chocolate, lilac, cinnamon and fawn.

British Shorthairs can be bred in "self" or "solid", which are all one colour, as well as the colourpoint, tabby, shaded and bicolour patterns. All colours and patterns also come in the tortoiseshell pattern, which is a combination of red and cream with other colours.

British Shorthairs are an easygoing breed of cat; they tend to be safe around children as they will tolerate a fair amount of physical interaction and hiss or scratch very rarely.[8] They have a stable character and take well to being kept as indoor-only cats, making them ideal for apartment living. They are not very demanding of attention, though they will let their owner know if they feel like playing. They often prefer to sit close to their owners rather than on them.

British Shorthairs are wonderful cats for people who work, as they are very happy to simply laze around the house while their owner is out. They do not get destructive or need other animals for company, though they do enjoy having another British Shorthair or a cat with similar temperament around.

They are not a very vocal breed but will meow to communicate with their owners, for example when they are hungry and their food is being prepared.
Some do not mind being cuddled, but most prefer to keep four paws on the ground and be patted rather than picked up.

The breed has become a favourite of animal trainers because of its nature and intelligence, and in recent years these cats have appeared in Hollywood films and television commercials. They can learn small tricks.

British Shorthairs do not require a lot of grooming as their fur does not tangle or mat easily. However, it is recommended that the coat be brushed occasionally, especially during seasonal shedding, since they may develop hairballs at this time.

British Shorthairs can be prone to obesity when desexed or kept indoors, so care should be taken with their diet.

Swedish insurance data puts the median lifespan of British Shorthairs at >12.5 years. The two biggest health problems in the breed are Hypertrophic cardiomyopathy (HCM) and Hip Dysplasia (HD). A Danish prevalence study with more than 329 cats showed that 20.4% of males and 2.1% of the females had HCM. On top of this 6.4% of males and 3.5% of females where judged to be equivocal.